Ill start with a bonus 😛 Cyrene Secrets will be easier to find now, we are in Cyrene’s ClientLoader! 😀 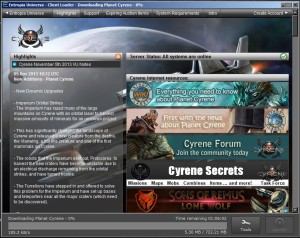 – The Imperium has razed many of the large mountains on Cyrene with an orbital laser to harvest massive amounts of minerals for an unknown project.
– This has significantly changed the landscape of Cyrene and released a new creature from the depths, the Vlanwing, a bat like creature andone of thefirst mammals on Cyrene.
– The robots that the Imperium sent out, Protocores, to harvest the new craters have become unstable due to an electrical discharge remaining from the orbital strikes, and have turned hostile.
– The Turrelions have stepped in and offered to solve this problem for the Imperium and have set up bases and teleporters near all the major craters (which need to be discovered).

– The Empis Wasps that inhabit this area have swelled in population. Something is definitely buzzing about in this area…

Five noteworthy players have been immortalized with statues:
– Agis, a master hunter who has hunted and documented his hunts of Cyrene creatures.
– non, who goes above and beyond to help many new players and offer suggestions.
– Remy, who has discovered many blueprints on Cyrene and has helped with feedback to improve Cyrene.
– Thanatos, has found, pointed out, offered suggestions on how to fix many bugs that were not made public.
– TunerS, who has compiled and shared all the data he has gathered about Cyrene from combines to creature loot.

Each of these players has helped not only in shaping Cyrene, but helped other players who have come to call it home.

– Aside from being a great place to hunt Puny creatures, there are now many simple missions available to help new players get started on Cyrene from the following:
– Miner Salazar
– Weaponmaster Aron
– Weaponmaster Rob
– Medical Tech Godfrey
– Fashion Adviser Robuck
– John Fhartly

– Vlanwing, a fearsome creature from the depths of Cyrene.
– Protocore, renegade mining robots that have turned on their masters.
– Acidic Jellyworms, mutated by toxic environments.

– I.S.O.R. (Imperium Orbital Strike Reconnaissance), a mix of Zekkonian and Imperium technology.
– A.R.C. Hazard, a combination of A.R.C. and Zekkonian design.
– Improved B.E. Armor, a combine of B.E. Armor and other materials into a new and improved armor set.

– The Imperium Refiner is finally available from the Trade Terminal.
– New Detectonators along with New Mining Amps.
– New First Aid Packs (aside from those crafted ones) for levels 30+.

– In addition to the BLP Pistol from the Stage Two Epic Chain ( Ozpyn BLP S1X4) there is now a Laser Rifle (Ozpyn Replical HK S1X4).
– New Clothing rewards from the Proving Ground and Arenas that can be worn outside of the Hub.

Daily Kill Point Missions for a wide variety of players from the Faction
Ambassadors just south of Puny Beach:
– Meet the Tahnok…
– Meet the Zyn’Kimbro…
– Meet the Turrelions…

In Following Stage Two Epic Missions are now fixed and available:
– Stage 3: The Zeladoth Pandemic (part 2)
– Stage 4: Right Outta the sky
– Stage 5: Cleansing the Sea
– Stage 6: Into the Tamangon Fires
– Stage 7: Yes, All the Skulls…
– Stage 8: Stalking the Stalkers
– Stage 9: We Need a Bigger Boat
– Stage 10: Bevis and the Gang
The culmination of the Stage Two Epic is also available:
– Stage 11: Stage 11: The Senator Speaks!
– Stage 12: The Empis Queen

– Many new clothing items (shirts, pants, boots, jackets, coats) have arrived and are available to buy from vendors with your Reward Tokens (White, Green, Blue, Purple, Orange, Red, Lime Green).
– The Proving Grounds items to engage in PvP have changed: now to enter it takes 5 Vibrant Sweat, and per kill you awarded 4 Reward Token (Lime Green) used for special clothing that can be worn either inside or outside of the Hub.

– Many grammatical and typographical errors have been fixed.
– Several world holes have been filled in.
– Tamangon Volcano PvP areas have been fixed to not be larger than they appear.
– Global threshold as been adjusted and no more “silent” globals should happen.

One area has been decreased in creature density:
– Imperium Air Base

– Teleporter cost to go from n00b base to Puny Beach has been removed
(however you still must go from n00b base to Puny Beach).
– Shopping booths have been normalized in their placement.
– Teleport areas have been added to A.R.C. Head Quarters thanks to a donation by Senator Calvin Neff.
– Removed many of the dynamic lights to improve overall playability.
– Fixed an issue causing any text with a “%” to only display “???”.
– The I.R.V.M. Instance has been closed while bugs are being worked out.
– The disappearing quest objectives should now be fixed.
– The no loot and no loot message bug should now be fixed.

Lastly, as always, please give adequate time for all the new loot to be added and new missions to be activated.