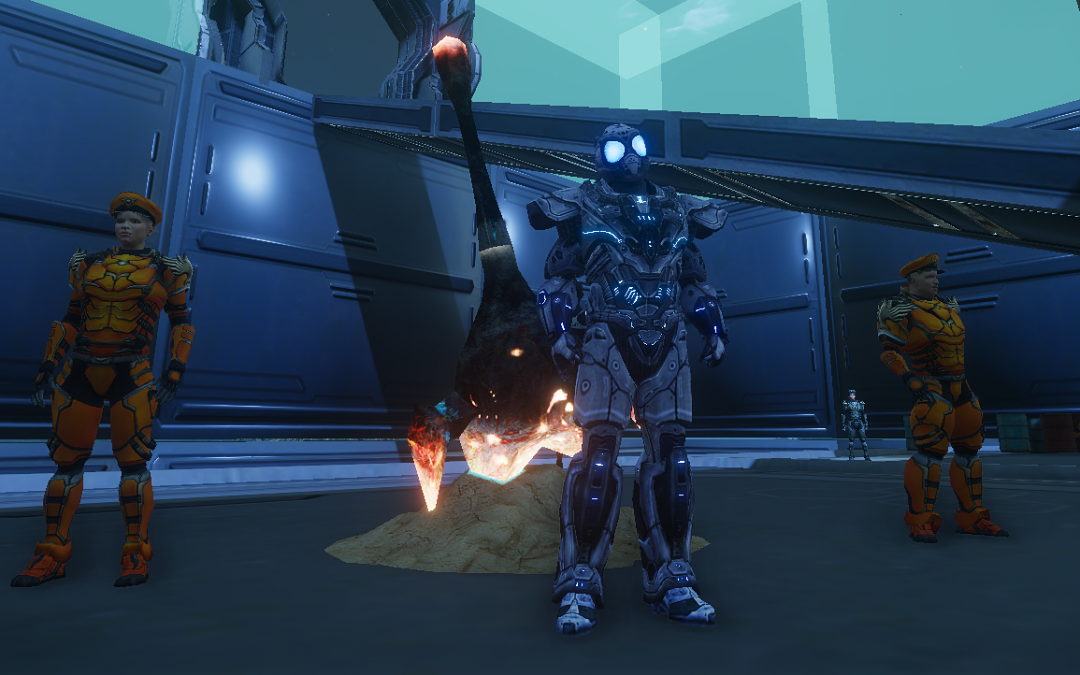 Mission and loot for it was REMOVED by MA, no updates when things change.

Let’s start from what we know already, and ill correct, add more data as it get’s avialable in time.

A long time coming, it appears that A.R.C. Scientists have finally been able to crack the code of how the Stolen Imperium Armor works, allowing players to turn in items to not only improve upon this iconic armor set, but allow players who didn’t have the opportunity to start this upgrade mission.

– so this is kinda where we start, cuz some players got Stolen Imperium Armor when it was avialable back in time

All the information can be found at the top level of Zorra’s Headquarters, just south of Rookie Training area and north of A.R.C. Staging area (in the big building).

– easy to find, it is also a place where we could see these armor models displayed last patch, and now there is also a new TP; to to the secon floor.

The 1st stage comes from John Hammer, Jake’s brother, he’ll want you to complete some missions for Jake out at Panton Jungle Teleporter before you can start to trade the requested items to get Paneleon Imperium Armor.

– Jake’s missions are about killing Paneleons, but in kill point fashion, so it’s quick to go forward in their ranks. Jake is located by Panton Jungle TP [Planet Cyrene, 134413, 77205, 126, Waypoint]; you need to finish first stage of his mission.

Stats look very nice overall, with some high burn protection, so after putting on it plates 5B, we get a nice overall and vs Paneleon mob armor

The 2nd stage comes from Zyn’torq, bond brother to John and Jake Hammer, you’ll need to make even further mission progress for Jake Hammer before you can trade the requested items (including the Paneleon Armor) to get Paneleon Spec Imperium Armor.

– Further mission progress for Jake, means more Paneleons to be killed, so you need to finish second stage of his mission.

Stats of that armor says it will be very good vs higher maturities of Paneleon, especially with some more Cut protection like from Pulsar plate, but even with 5B it will be nice there.
After using on those any high Penetration/Burn plate, we get an awesome robot protection.

And now we can upgrade it to Improved Imperium armor Rank1 Vendor room in HUB, so you need at least 200 Badges to get there.

The 3rd stage starts with a disguised A.R.C. Scientist, who won’t even talk to you unless you have some A.R.C. Badges, but if you do, you’ll be able to hand over your Paneleon Spec Armor and some other items to receive the Adjusted Imperium Armor.

How to get ARC Badges, read there – ARC RANK 1

The 4th stage you’ll meet Mr.Zedmore Fontaine, but everyone calls him Zed. He’s a tech genius and quite humble about it. If you have even more A.R.C. Badges then you can give him your Adjusted Imperium Armor and some other items for Improved Imperium Armor.

The 5th (and current final) stage starts to bring in a group of people from Sky Labs. Lunas is one of Vida’s top assistants and is able to take your items and Improved Imperium Armor to the next level and grant you Modified Imperium Armor.

– Lunar is located also in Zorra’s HQ where other armor upgrade guys are; You need to have at least 100 ARC Badges in your inventory