What are u guys doing? VU is comming and you …

… and you are selling for cheap goods that had a crazy MU last time they had a use!

Of course it was a long time ago, when armor sets were avialable to make, but Cyrene developers announced already few times, that those materials will have a use again. 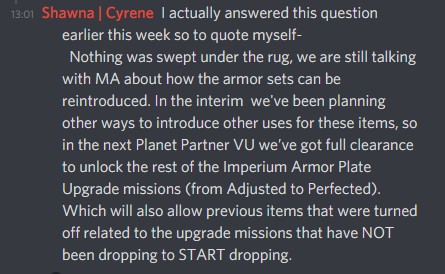 You are a reader of my blog, but maybe you are not so often on Planet Cyrene itself. so i’ll give u some backgroud.

Few months ago we had a crazy time here, because we were able to create awesome armor sets following some simple missions and turning in various materials.

Unforutnately MA turned off NPCs that were giving those missions. It happened just after a week, so many people ended with materials, but not armors yet.

Cyrene developers promised that they will do something about that.

At first they introduced the first stage of armor plating upgrade (Imperium Armor Plating I), with a row of NPC ready for future usage (from adjusted to perfected), that reminds me what Next Island offers already – upgrade from Serpent Scale to Perfected Serpent Scale.

First stage of upgrade takes already some materials that were used in armor missions, so there is a high chance, more of them will have a use now too, so i don’t sell those…

Here is what was in use for armor creation before,

and what we use now already:

As you see, there is some crossover, so imo there is a high chance, there will be some more.

This list do not include materials that were required to create components and collectibles, and some like Wiles Ingots, were essential…  better check that too 😉