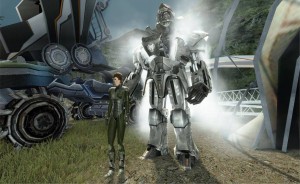 A.R.C. Faction (Acaia Rebirth Corps), in short words are rebels fighting for the humanity... or something, but for sure they are agains the Imperium.

Later on ill try to substract from here some data about this faction, but for now, try to go through that on ur own 🙂

She will give you a mission which is called Zorra's Epic Mission Chain.